I wonder if you remember the "Erratic Boulders" water color painting I did about six months ago. The idea of something heavy, yet transparent -- or heavy but pending or even falling -- needs to find new expression. I started with water color again. 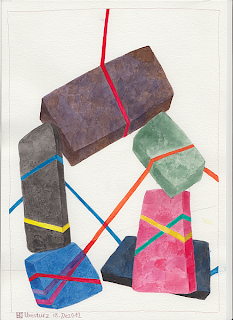 "Overturn" is not yet finished, the bright-colored stones might become darker and subdued, I'm not yet sure. The strings to hold the things (obviously dilettantic packing) cannot suspend the weight.

As I cannot paint water color in the living room, I got back to color pencil which I haven't applied for a longer time.  This results in tender pastel colors; I used a rather rough water color paper which has a visible structure. "Green Horizon" is a remake of the "Boulders" arrangement with a green line that separates earth and sky and penetrates or embraces the stone.

And again, there is the idea of heavyness, sinking down, following gravity, as time passes. 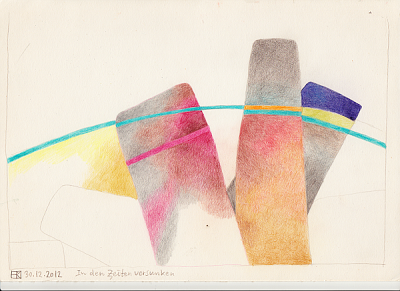 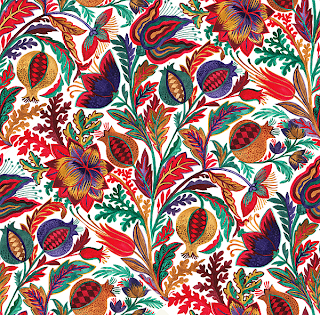 No Time for a Stitch

During the past weeks, I was very busy with a book project for the regional parlament. No time for quilting or embroidery. But now I'm almost thru with it, and we spent the weekend in Berlin, as we have done during the past years. There will not be many pictures of Berlin, because we met it either dark or in heavy snowfall, so taking pictures just wasn't possible. I just took a few on the ride and removed the strong green tint it got from the train window glass.

Starting out from Hamburg, well-prepared for the freezing temperatures. 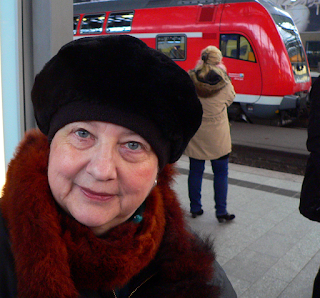 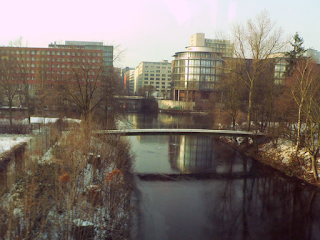 The Train takes us through the suburbs of our town. 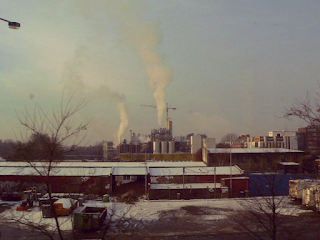 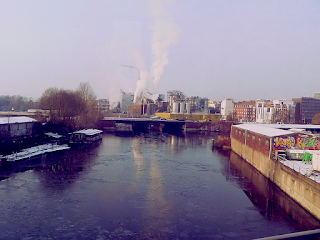 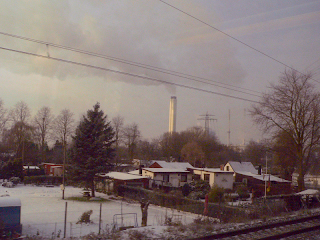 Then, we were heading for the capitol through the vast plain of Mecklenburg. 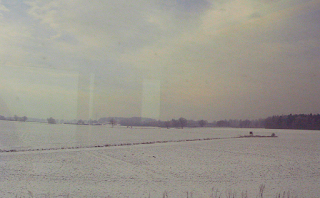 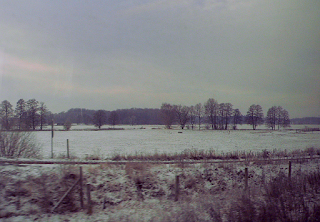 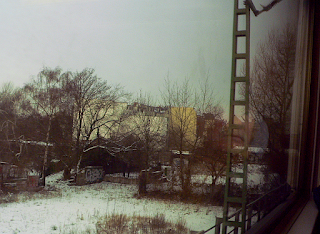 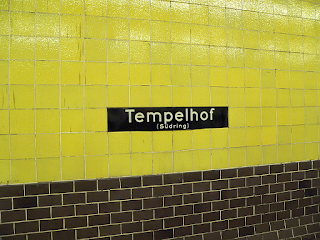 My husband needed new boots! When the weather is so bad, he still wears his army boots, you can see one on his left foot. And they were way too small after 26 years! The new pair are waiting on the left of the picture. You can see the size difference. I warned him what would happen if he kept wearing the old ones, so he agreed to purchase a new pair. 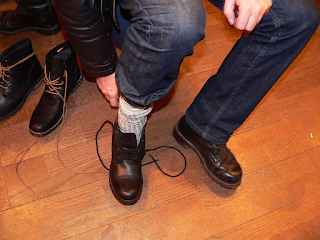 We had lovely meetings with friends and relatives, although not everyone was able to join -- the cold demanded a victim who lay in bed, sneezing. We had meals with the rest of the bunch and a lot of fun. 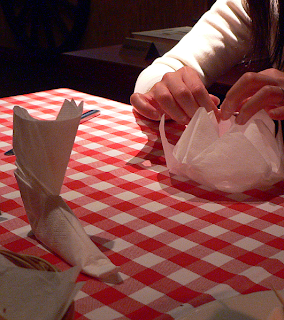 Our host made some origami after the meal at an Italian's. She created a Santa's boot, and the host was enchanted and placed a cookie into it.
Next day, we went to the New National Galery, a Mies-van-der-Rohe-building. We fought our way through a blizzard! Near Potsdamer Platz, there were smooth metal covers on the ground, hidden by the snow (who was so foolish to design that??). An elderly lady fell down -- hope she did not get hurt! I was close to slipping, too. We reached the galery and saw an exhibition of post-war painters. There were some German painters, their work was related to American Abstract Expressionism. My favourite was HP Zimmer, "Gelbe Gefahr".
The personel of the galery did their best to represent the old spirit of dictatorship and literal obedience to prescriptions. The East is still too close! They should be prepared for democracy. 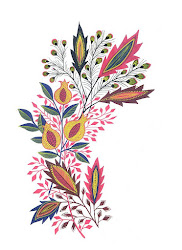 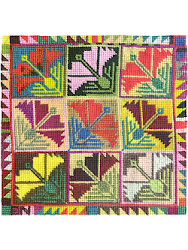